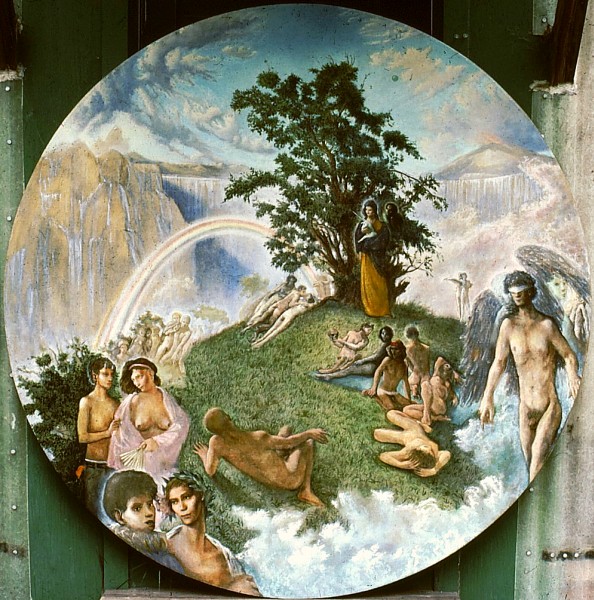 a brief commentary by the artist

All serious works of art in the 20th century refer to other works of art. To fully appreciate this allegory it is necessary to be conversant with Ingres’ “Turkish Bath” and Bronzino’s “Allegory of Love” (also it doesn’t hurt to be mindful of the extensive series of neo platonic bacchanales painted in the Renaissance which reached their heights in the works of Titian and Rubens and which continued through the 19th century to our day). There is a marked contrast between these two works and my painting and it is that contrast which gives my painting its edge.

The canvas is painted in a non anatomical, non realistic, slightly astygmatic style which is the painters equivalent of “in a galaxy far, far away.” An artist, recognized by his shaved head, alone in the middle distance, dreams of and orchestrates a more perfect world where everyone is, as it were, at the beach. The topic is Love not sex. Though we suspect that some of the characters may have sex on their minds, sex is not depicted. The painting is “retardé” in that it looks back to another (better?) time, to a garden, a place of innocence, a Golden Age (as in the ruined mural by Ingres by that title).

The unicorn is an ancient symbol of Christ.

The tree refers not only to all those things that trees refer to, but also to the Tolkien short story, “Leaf by Niggle.” While we’re discussing the literary we must acknowledge that the painting is endebted to Kenneth Clark’s The Nude, a study in Ideal Form.

A satyr discusses death and shows a skull to a young woman who doesn’t wish to hear about it in her ideal garden and turns away much as we turn our heads away from the A.I.D.S. headlines in our daily newspapers.

Two of the women reclining are based on a single figure drawing done in Boston before the fire.

This ideal world is held in balance and tension between the duo signs of the rainbow and the volcano, and we don’t know what will be the outcome for the depicted civilization.

The canvas is round indicating that everything depicted is sacred (in Titian’s “Sacred and Profane Love” it is the nude figure that portrays the sacred, not the clothed).

The work is unsigned as it was interrupted and left unfinished and unresolved in ’81 when I moved one time too many.

There are other subtleties which I leave to the viewer to discover as finally I would like to discuss the title “1967, Forever.” The values expressed then, even with all the failings, disappointments and dead ends of the period, remain to me more noble than what I have seen since. The belief that Love and Peace can and will rule the world and that an individual’s worth and contribution are not determined by race, money or the clothes that we wear or the lifestyle that we lead.